Human Landscape Dance brings contact choreography around the world. Specializing in artist partnerships, Human Landscape Dance has given performances, held workshops, and shot video footage in Europe, Asia, and South America, as well as cities across the US and Canada. Noted for “…ingenious choreography and staging…” by the Washington Post, the dances of Artistic Director Malcolm Shute are characterized by intimate portraits of people experiencing fundamental shifts in their lives and relationships: becoming reacquainted with lost loves, running out of space, or getting tossed. Each project unites body and environment. In addition to live performances, they have released dance videos shot in unlikely places: under the gothic arches of a French Abbey or within carved sandstone caves in Abiquiu New Mexico. 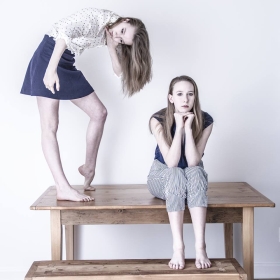